As I continue to move more deeply into the Upanishads I've come to notice how certain emotions are further nuanced and located in the larger matrix of feeling and action. How do we get from one to the other, that is, from whence the feeling arises to how we process the process of consequences of activation (that is, doing something about the feelings, not just the topic.)
This morning I had an interaction with someone we care about deeply who is not yet vaccinated. She's no anti-vaxxer, intelligent and caring, and she knows "I should have already done this and I don't know why I haven't."   No one really likes to be explained to---it's annoying at best no matter how caring---but alas, like a good pundit (aka college professor) it's sorta' my job to state the obvious until it gets through. With your friends you can't just make them do what you say by threat or mandate of consequences. With college students, I am not so merciful. With pals, I try to offer a sweetness. Here she asked a good question. Why has she not yet acted?


At least some of the reason is that dread is a complex species of fear. It is fear in abeyance, not yet realized or with immediate consequence; dread is fear on the radar but not yet in sight. It comes with some important foreknowledge that things can be done---like you can write a will or get a vaccination. Dread includes the understanding that there's no endgame you can prevent but rather things to make the world better just for awhile.


You're not merely procrastinating over the fear itself. You are also residing in the space between the outcomes of fear and ability to act on them. Much of what dread portends isn't something you prevent or stop, like death or old age. That sense that what we could do is not enough to stop what we don't want plays an important role because it's precisely where we pause. We pause in dread.


Dread is also fear plus enervation or, to put it another way, another enervation-induced fear. This means we would rather not when we know we should but must right now is not wholly realized. Let's add that we just used the word "should" and little makes the autonomous human pull out the Gadsden Don't Tread On Me quicker than should ought must imperatives; make something normative (ought to) and it's suddenly not normal (regularly agreed upon by most?)


We feel dread when we feel our freedom is being impinged upon when in fact it is the dread that is creating the more insidious impingement.


The Upanishad reminds us that it’s in the words. Just saying them matters. 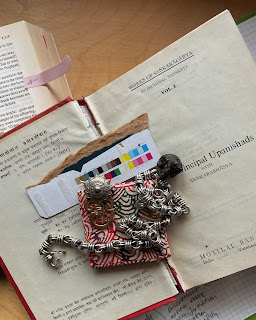 In English we first reference the word “dread” somewhere around the 12th century. The etymology suggests it is shortening of the Old English adrædan, which is itself a contraction of ondrædan "counsel or advise against.” The ond- is "against" and there lies the first root from Proto-Indo-European, that is, *ant (like in “answer”) plus the OE rædan "to advise,” which is from the PIE root *re, as in “to reason, count"). (Cognates would include the Old Saxon andradon, Old High German intraten.)


The key to it all is the relationship of apprehension to action. We are answering to something we feel deeply and we are simultaneously reasoning, or we might say rationalizing.   As the Upanishad explains we are using both feeling and reason but in a less than effective ways or perhaps too effective ways. But in both cases the dread is doing us more harm than good, which leads the sage to declare that it helps us draw an important line between what is good and just downright evil.


Evil isn’t merely wrong anymore than it is unfixable but it is real enough to bring us to a less than healthy possibility when there are better ones before us. We might not be able to stop the thing that dread ultimately speaks to—death, taxes, whatever—but we can do something about the dread. Now just what would that be? More later.
Posted by dbrk at 8:50 AM