The Preamble to the American Constitution begins with the words "We the People..." and creates a possibility not imagined by the founders in their compromised document, which defines rather narrowly what "we" means.
Lincoln revisits the problem at Gettyburg when he declares us a government of, by, and for the people. But his transformational understanding was set back when Reconstruction performed its mighty work of oppression to reestablish and enforce a more familiar systemic racism. It would be another 100 years before civil rights would again be made a matter of the American conscience confronting itself. 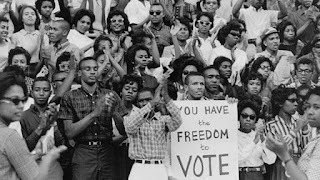 It has been more than 50 years since voting rights were putatively extended so that all of "the people" might vote. And once again the forces of revanchism and repression are busy and committed to insuring white supremacy. There is no irony that the current party of Lincoln represents those determined efforts to keep power from the people, especially brown and black people and native peoples, is what surprises. What is noteworthy is how little those racist values have actually moved from their perch and how shamelessly Republicans stand up for racism implemented by the manipulation of the law.

John Kavanaugh chair of Kentucky's Government and Elections Committee explained that Republicans were happy to create measures that kept people from voting because “everybody shouldn’t be voting…. Quantity is important, but we have to look at the quality of votes, as well.” Could their position be clearer?
There are concerted efforts in dozens of States, all run by Republicans, to use "fraud" and other dogwhistles for racism to be the reason to make it harder to vote. What they do no accomplish by creating the New Jim Crow, they may take by gerrymandering. In North Carolina, for example, in 12 of the state's 13 congressional districts Democratic candidates got well over half of the total votes, but Republicans won eight of the seats. In two-thirds of those races, the margin of victory was more than 20 percentage points. The effort to thwart democracy could not be more explicit.
Note President Biden's remarks in contrast, here pleading for a national response to the COVID pandemic, "“The government isn’t some foreign force in a distant capital,” Biden said. “It’s us. All of us. We the people.” Even on matters of public health, Republicans are determined to claim that their personal"liberty" gives them the right to decide for all of us power over life and death. Some 50% of white Republican men say they will not take the COVID vaccine. They are not only determined to rule over the majority but to infect us.  Sturgess anyone?
Given the demographics of the Senate and the prospect for losing Congressional power in the 2022 midterms, Democrats must understand that voting rights are as essential as, say, infrastructure, climate change, and justice reform. They must fathom the depths of our Cold Civil War and that H.R. 1, the voting rights act now conceived may not have the votes in Congress to pass.
There is little they can do to change Senators who will not end the filibuster, seeing it as the legacy of Jim Crow that it has always been. Still they must act to pass something like H.R. 1 or Republican state governments will instantiate once again their racist objectives, insuring that it is so hard to vote that their advantage means fewer and fewer people participate in democracy.
Could anything be less American? We might counter, could anything be more American than structural prejudice used to insure white power?
This is a harder issue to get people to understand with the same urgency as bread and butter issues. Hopefully President Biden will not only explain the American Rescue Act, which may in fact reverse the scourge that Reaganism set in motion 40 years ago, but use his competence and popularity to tell Americans that democracy is at stake, that the republic may yet fail, and that unfortunately one political party is determined to make sure that voting is not a right extended to all.
Biden will not resort to the language that we propose here, that we are in the midst of a great Cold Civil War. And he should not. That would not win enough hearts and minds just as there is some light on the horizon.
But he has to make clear the urgency and fragility, and indeed the threat posed by the political party of racist authoritarianism. Just how to do that?
Tell people that it should be as easy, as normal to vote as it is to get a vaccine.
Posted by dbrk at 4:22 AM No comments: