The lies. It could never have gotten to this point without the cooperation of an entire political party and its propaganda system advancing agendas of misinformation. They have been determined to turn policy differences into "war." And Trump is merely the outcome of this long degeneration into indecency and violence.


I'm not talking about ordinary political lies. Some of those are well-meaning, like "we are better than this." We are? Not a chance when there is a lynch mob and a scaffold erected at a rally where the president and his enablers speak. Some of those lies are all just more insidious grifting and power grabs that serve monied interests. Like McConnell who will never do anything but what serves his donors. And as for policy, it was all just lies, ask Stuart Stevens. He helped create the lies and has, at last, admitted it. New polls suggest that the vast majority of Republicans believe the lies and support Trump. Would they if their leadership told the truth? Apparently such "leadership" is incapable of the truth. 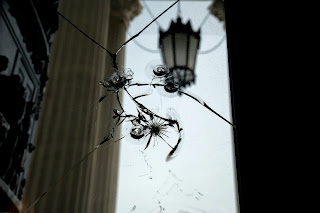 Oligarcy is a serious issue in America: we are fundamentally a society of economic injustice and privilege for the rich. Much of that is the tawdry underbelly of racism and the fear of white people that they are soon to be the minority of voters. Who are we kidding?


Back to the moment.
There never was fraud to be investigated---that is all part of the lies. There never was a conspiracy to undermine the election and there were no "irregularities"---all according to _Republican_ officials who presided over the vote. Sore losers?Sure. But it cuts so much more deeply. Until they all repudiate the lies, clearly and unambiguously we must not let up. No lessons have been learned. Nothing has changed and, worse, it could happen again.


In the next week Trump may in fact foment more civil war. State Capitals may well be besieged by violent insurrectionists. And the entire Sedition Caucus has to go. What would it take for them to be "forgiven"? For that, we need a story.


Once a man told lies again and again about his Rabbi. Coming to his conscience by hard lessons, he goes to the Rabbi to ask for forgiveness. The Rabbi says that he will consider it but first he must take a feather pillow to the top of the hill and shake out all the feathers. The man says to himself, "Okay that's weird but I will do it." When he returns the Rabbi says to him, "Now go back to the hilltop and pick up every one of those feathers."


It is far more than Trump. The House Republicans are not just a joke, they are by majority seditionists. And the Sedition Caucus, the Republican leadership and all of their enablers who have advanced these lies must own their part inciting the rioters.


We must also ask why so great a percentage of Americans have believed _and continue to believe these lies_.


This did not happen overnight. It has been decades in the making. Whatever legitimate concerns people have for their diminishing lots in life---for example, the vast majority of Trump voters have less than $2000 of savings---they have been poisoned like water in a well since at least Goldwater advanced the New Jim Crow that is now the policy of Minority Leader McCarthy and the rest who have sought to disenfranchise legitimate voters. Imagine if they had had the majority? It is more than likely they would have voted to overturn the election. Whose votes are they so happy to disenfranchise? That is easy to answer. Racism, our original sin, is in full view.


There is zero chance that the criminal Trump will do the one thing he would need to do to put this country on any tract to heal. That is, to admit that he lost in a free and fair election. That _fact_ is beyond him and everything else will continue to flow from this Big Lie. How can we begin to discuss the pernicious effects of racism and other facets of our national failure until we agree upon the facts and _tell the truth_.


Until Republicans in one voice denounce the Big Lie, purge themselves of conspiracists, and stop the propaganda machine of Fox, Rush, NewsMax and the rest, they are unfit to lead. We are one election away from their plausible rule. Are you not afraid of that? Even Republicans with just the slightest dose of sanity remaining?


There are deep structural reasons why so many are so susceptible to all of the lies: structural racism undermines every effort to address income inequality, failing job opportunities, the fears that come with health insecurity, and the rest. It's easy to rile up the mob with conspiracy, culture war fears and anger, and it will be no small task to change such views. Whether its guns or Jesus, the fact is that the relentless onslaught of misinformation and stoked hatred has brought us to a sad and dangerous time when the very fate of the republic is at stake.


How about telling the truth? Until that happens there is nothing more to do than marginalize their power, turn out the vote, and hope that the current version of the Republican Party simply rots into its own factional civil war. If Democrats don't deliver some progress for _all_ this is going to get worse before it gets better. And yes, there is worse. So let's make it better.
Posted by dbrk at 7:10 AM