Hey Joe, Hey Joe (said now)
Where you going to run to now?


Joe's instincts are to run to the middle and make a deal if he can. The reason this was once an idea that could have some value is that we have lived in a deeply divided "country" of States since the founding of the republic. If you want to govern you have to bring along those deeply opposed to change, the religious, and create coalitions of uneasy partners, and that's on _your own side_. Your opponents will do everything they can to defeat you at every single moment. The idea of unity is somewhere between a fiction and a "political belief," which is a euphemism for useful but sure to fail lie.


Democrats will form their circular firing squads in no time at all. Take, for example, Obama's latest remarks: he is always utterly sensible but not always effective when seen in juxtaposition to his equally necessary but ineffective claims for unity and the arc of justice. There is no arc of justice and neither are we going to be better unified just because Joe is pleading much the same case. 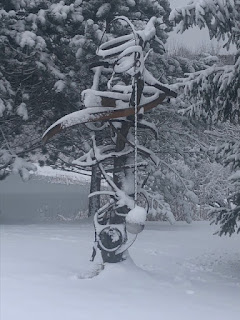 Mitch will see to that, especially after Republicans win in Georgia no matter how explicitly foul or inept they are in running for office. Remember the inveterately decent Doug Jones couldn't hold on in Alabama to a malignantly ignorant football coach who doesn't know there are three branches of government. Being capable or wise or having a history of decency really doesn't matter much at all.


In American politics you have to lie about "coming together" just to advance the pace of a livable-hypocrisy and slow the incipient violence right below every surface. Americans only care about money and their own interests, making us neither special nor particularly different from others.


Our exceptionalism is more clearly founded on our unwillingness to learn from mistakes and evolve, much less work with our shadows (particularly the legacy of slavery, racism, and bigotry). Republicans before willfully condoning their path to being now the anti-democratic Fascist Party used the capitalist brand as the acceptable cover for unconflicted selfishness and white supremacy.


So if Joe were reading this, I would tell him to do a few things to make this brief respite from fascism and climate suicide worthwhile.


First, continue with the full-throated unity message not only because he sincerely believes it but because it's wise politics. It may be bullshit in practicum but that never matters.


Next, undo, repair, and work to fix as much damage as possible with the same ruthlessness that Trump and Republicans use to ruin the world. That executive pen needs to flow every single day, persistently, quietly, but above all ruthlessly. And then when Republicans scream, do not cower, apologize, or explain. STOP EXPLAINING. Just do it and then brag about it louder and louder every time the fascist racists complain, demagogue, or posture.


Further, expect no help from Democrats and expect only obstruction and failure from Republicans. You will be without control of the Senate---because Georgia will once again prove that it is really South Carolina, I am predicting big wins for Loeffler and Perdue, despite the better candidates, the money spent, the whole brilliant effort, despite the Republican disarray, ineptitude, incompetence, and venality, it's going red. Thus, Mitch. And that means the entire country is held hostage to the real power of this one evil man, the Grim Reaper.


So you must speak out of two sides of your mouth. First, preach unity and bipartisanship but expect nothing from Collins or Romney, who will fall in line with McConnell. Second, denounce McConnell every single day for what he is. It won't matter because Mitch don't care and will do whatever he wants. He is the power you don't have, Joe, and there is nothing you can really do about that. Win the Senate in 2022? By then you're likely a lame duck. But fight the fight with kid gloves to Democrats and with utterly ruthless fury against Republicans.


There's not much we can do to stave off the climate change suicide. Profit and stupidity will prevent that. The Green New Deal is as likely as defund the police is stupid sloganeering. But you can bring a few years of decency and make the clarion call louder every day. That would be good.


Joe, you likely have even fewer years left than I do. I mean, I'd like to say I have 20 or so, hopefully with my wits. So let's make this a bearable time even if we know we're going to get little help from our friends and nihilism from our opponents. Maybe we can enjoy some sunny days this coming summer if you can persuade Americans to get the vaccines. Good luck with that too.
Posted by dbrk at 3:08 AM