A Tale of Two Narratives (Hint: Keep choosing the sane one, even if you're not sure.) 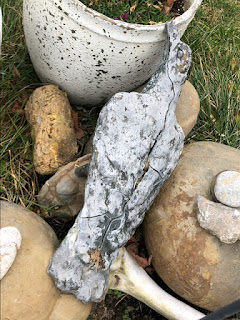 You might think that he'd figure out that his lawyers aren't very good at this or maybe, just maybe he really did lose. But he knows he's gone because he means to do as much damage as he can on the way out---evidence for the expedited arson is already in hand.


The story in semiotics and actions belies the goofy Twitter rhetoric, which however contradictory is part of the usual chaos pathology. Nothing but attention will do and there are only those that praise and the enemy. That'd obviously be us but it's always better to hit closer to home, especially when elected Republicans and judge appointees are dismissing your cases and ridiculing your claims.


When do the lawyers get the rap? Say, Rudy too? Or does Rudy stay to become part of the act? He looked bad with that hair dye make up thing but he might still want to be a useful idiot---there's so much money to be made for both. Stay with the cash, there are so few fingerposts that to follow the madness and impulse. The grift is on, not that it's ever off. Ther is serious money to be chased from those dupes.

To tighten the circle is not to lose the dupes, which is why the rest are treasonously silent---like nearly all the remaining Republican Senators. They want Georgia and if they just shut up and don't aggravate the dupes they will win both. Reality doesn't matter, results do. They're confused with what to do but have every reason to believe that he holds the power over voters they can't live without.

Of course, the Lincoln Project vows they will never forget but didn't he get 7 million MORE votes this last time? Fox has learned that you can make a lot of money with 40% of the country watching you. Majorities are just inconveniences that can be fixed with gerrymandering and other minority-rule devices, like Mitch himself.

The small type articles in The NYTimes are chronicling the packing of agencies, expedited schedules, attempts at irreversible policies and positions. It would be merely tiresome and annoying were it not tantamount to sedition (or is it treason?) and it's long term damage. Imagine if the 45th President of the United States actually, as is rumored, holds a rally _during_ the inauguration of the 46th? Which banana republic would that make us? Oh, this one?

So his behavior tells us he does know but the rhetoric, as is always the case, need not represent any fragment of truth so long as it foments more chaos, attention, and loyalty from the dupes. There are a lot of dupes whose money will soon flow regularly to Fearless Leader and that seems to be the core of the plan. He's gonna need a lot of cash both for debt and lawyers 'cause they're coming and soon.

In between raucous bouts of archaic Sanskrit, I listen most closely to the voices of Michael Cohen, the convicted lawyer, and the old Obama pair of Plouffe and Axelrod. Cohen has this once contrite and vindictive temperament that does nothing to make you like him more but he does seem to me to have a bead on Trump's psyche. No one else calls the Donald better for reading the inside out: Cohen knows that Trump is about money and winning and predictable if you know where to look. It's that lack of the later thing that's causing less of the other thing that's gonna be the biggest problem for Mr Trump if ya' follow then follow the money, always, got that?

The grifting enablers are close behind. The Obama adviser types inhabit a number of subsphere echo chambers but on blogs they drop f-bombs and feed on candor root. (Who knew? Are there candor root smoothies yet? Sounds, I dunno, yogic.) They keep you apprised of how the enablers and dupes are taking it and the scary mofo politics that is undermining small things, like the actual republic and democracy. Comforting, right?

Cool about Joe is that he is acting as if virtually none of Trump Insanity matters terribly much but for the damage it is doing. But that need not be said too loudly because Joe's whole schtick is that We the American People Can All Do This Together thing. He may well believe that. He may have to but he likely has to no matter what he feels 'cause pleading, even dissimulating some for the sake of hope is the exact opposite of the other guy. Never has the Two Narrative America been more exposed.

The difference between those two narratives is that Democrats care about the narrative because they are anything but unanimous over policies that will likely be achieved without help from Congress. Anyone sensible would think that we are in an age when "due order" legislation comes only under duress, that there is no functioning legislative branch because Mitch. Done.

I mean, there's a chance in Georgia but I think there won't be any split ballots and since when do white people do a good thing twice? If I won't take the bet does that make me cynical or just whispering 'cause Joe's messaging is the better even if he's wrong about any cooperation. He will get none, zero. No one will defy Mitch, much less Collins or even Romney. Does Trump still own their other choices?

This all suggests that we have actually made it to January 20th. Or can we say the 21st? Winter means we need to weather pandemic, holidays---whatever that means---political mayhem, scary economics, threats to world peace and world peas, shall I go on? I think we'd better talk about other stuff too, like poetry. Just to keep it real.
Posted by dbrk at 9:35 PM